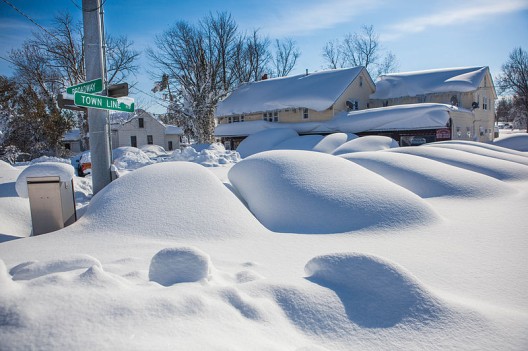 The city of Buffalo, New York is well known for major snowfalls that make the evening news, and the city is often remembered by video clips of residents shoveling out from several feet of snow. This year is no exception, but the difference is that the snowfall came very early, and very heavy. In some parts of western New York State, almost eleven feet of snow has accumulated after several back-to-back storms battered the area.

Buffalo is well used to big snowfalls, but this year’s early, huge snowfall is being closely followed by a warming trend that is sending temperatures soaring into the 60’s. It is feared that this very sudden warming will send dangerous floods coursing through the streets. At this writing, a flood alert is in effect for a large chunk of the state, and many are worried that the floods will overwhelm most flood defenses.

As if all of this is not bad enough, strong winds of up to 60 mph are currently battering the zone, with many trees expected to fall victim. This will result in downed power lines, which in turn means sump pump failure in many homes and businesses. Floods on a massive scale appear imminent, with most local meteorologists saying that major floods are now a certainty.

Authorities have issued guidelines for what to do before and during the floods. It is likely that many residents will be forced to evacuate homes that are at low elevations, and people are being advised to prepare for the worst. Homeowners throughout the area are advised to elevate furnaces and water heaters in their basements, and to set up generators or battery back-up for sump pumps.

Buffalo is well-equipped for snow removal, but how well is the city prepared for floods? City residents are about to find out the answer to this question. New York Governor Andrew Cuomo is on the scene in Buffalo warning residents of major, dangerous floods. The Governor was widely criticized for his perceived weak performance during Hurricanes Sandy and Irene, and is eager to project a firm image with this new disaster.

Cuomo is exhorting all residents to stay alert, and to evacuate promptly if conditions require. He also points out that the snowmelt is far from pure: “It’s not water,” Cuomo reminds citizens. “It’s a toxic brew. It has sewage in it; it has runoff in it.” As Buffalo braces for the worst, Governor Cuomo and many others are hoping for the best.