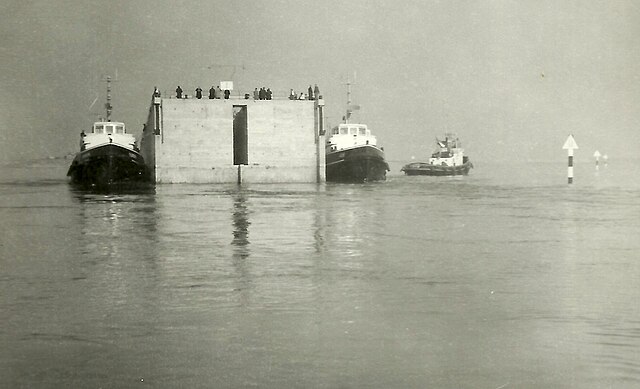 For centuries, the Netherlands has been staving off the seas that threaten to claim the vast majority of Dutch real estate. Flood barriers and sea walls of all descriptions have been used, with various degrees of success. Over the years, the Dutch people have learned, via endless trial and error, the best practices for holding back the water.

However, even the Netherlands cannot completely control flooding in the event of a major storm surge. In the year 1953, the North Sea invaded the country, devastating the countryside and taking 1,835 lives in a single night. After that horrible event, the Netherlands developed a different strategy, which involved working with nature instead of against it. Now, flood authorities allow water into the land in a controlled manner. Canals and waterways stretch deep into the land, allowing floodwaters to follow a natural path that minimizes damage by keeping the water inside the designated water-routes.

After floodings of 1953 in the Netherlands the Deltaworks were executed to protect the coast. Part of the work was the closure of a sea arm called Het Volkerak. Open caissons where placed in the opening and closed when the tidal current was dead and then the caissons were quickly filled with sand and covered up.

Manhattan and other flood-prone parts of New York and New Jersey face nowhere near the same challenges as low-lying Netherlands. It is not true, as it is for Holland, that most of the land in these areas lies below sea level. However, it is true that Manhattan, New York, and New Jersey will suffer an ever-increasing threat of regular flooding due to sea level rise, increasing frequency of large storms, and other factors. Now we find that architects, engineers, and city planners are looking to the Netherlands for models of effective flood control on a regional basis.

Recently, New York Governor Cuomo announced a plan to emulate one of the most successful policies that has been implemented in the Netherlands. Cuomo’s plan calls for buying back property that probably should never have been developed in the first place. The plan will then replace existing homes and businesses with wetlands, parks, and greenbelts that can absorb and safely divert floodwaters. Sand dunes will be placed to act as natural flood barriers that will block major surges and channel the water in the desired direction.

This plan is somewhat of a departure from the usual American attitude, which tends to emphasize disaster relief over disaster prevention. But with the greater frequency of major storms, the horrific loss of life and immense financial cost of such a response, more and more communities are beginning to look for a new approach. Governor Cuomo is not alone in shifting towards a preventive outlook, but he is surely one of the most prominent proponents, and he has the resources to put his ideas into action.

The Governor envisions a changed coastal zone with development pushed back from the seaside. Flood barriers will be natural if possible, and aesthetically pleasing in most cases. The new flood absorption zones will provide many opportunities for recreation, bird watching, and pleasure boating. Displaced property owners will be coaxed into cooperation with cash compensation and relocation assistance.

Although the plan will not be palatable for every affected citizen, the majority will benefit from reduced threat of flooding, attractive new recreational zones, and perhaps even lower flood insurance rates. US flood control companies, some using experience gleaned over centuries in the Netherlands, will help build a safer and more beautiful New York. This assistance from the Netherlands is perhaps very appropriate considering that New York was originally settled by the Dutch, who named their colony New Amsterdam.