In September 2018 at historic Revolution Mill in Greensboro, North Carolina, Hurricane Florence threatened with high wind, rain and storm flooding. The structure weathered the worst of the storm thanks to Flood Log™ flood barriers from Flood Panel LLC.

On the National Registry of Historic Places, the building was the first flannel mill in the South and by 1930 was the largest exclusive flannel producer in the world. Manufacturing in North Carolina declined in the mid-1900s and the Mill eventually closed. In 2012, a $100 million redevelopment project transformed the site into its current state.

Revolution Mill sits along North Buffalo Creek, a stream prone to flooding from seasonal rainstorms and hurricanes. Recognizing the vulnerability of this historic space, management purchased Flood Logs from Flood Panel LLC to protect the site from water damage during a flood event.

Hurricane Florence began like many hurricanes in the Atlantic, as a tropical wave off the coast of Africa first identified by meteorologists on August 30, 2018.

By September 7, Florence had strengthened to a Category 4 hurricane with a bullseye on the North Carolina coast. Two weeks after it was first identified, Hurricane Florence made landfall in Wilmington, N.C. on September 14 as a Category 1 hurricane.

Gradually the storm weakened, but began to slow down moving only 2-3 miles per hour. Storm surge plus historic rainfall caused catastrophic flooding along the North Carolina coast. At one point, the entire city of Wilmington was completely cut off by flooded roadways. Some places recorded over 30 inches of rainfall and many rivers overflowed their banks. Ready for the Storm

Management at Revolution Mill was ready for major flooding due to sudden storms, flash floods and hurricanes. They had 27 sets of Flood Logs to safeguard the structure.

Fortunately, Hurricane Florence gave the building maintenance crew a lot of time to prepare. “We saw it coming and we were watching developments,” said Don Elliott, Maintenance Supervisor, Revolution Mill. “We had a crew on site to put the Flood Logs up as soon as we knew we needed them.”

According to Elliott, they deployed 22 of the 27 sets of Flood Logs to secure the most vulnerable openings. Installation was fast and easy.

Although many businesses in North Carolina sustained major damage from the storm, Revolution Mill was spared. Flood water was an issue at only one of the protected entryways.

The Flood Logs held up to the rising water, which rose to three feet on one side of the building. According to Elliott, “Water rose outside an area of the building under renovation to become retail space. The water would have caused a lot of damage.”

Once the danger had passed, Revolution Mill stored the Flood Logs on custom racks. For now, they sit idle in storage, but ready for the next storm. 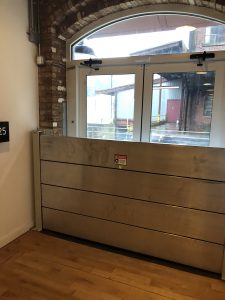