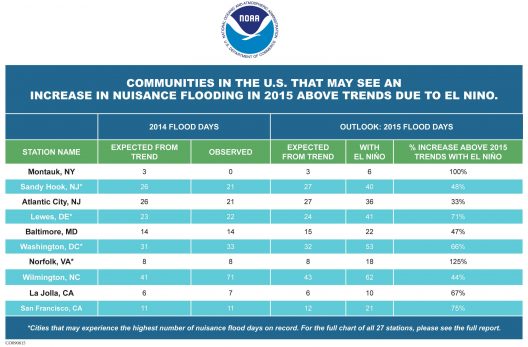 All along the coasts of the USA, a new phenomenon has been recorded over the past half century. We all know that catastrophic floods have been increasing in both frequency and scope. But now it seems that minor floods are increasing as well. The National Oceanographic and Atmospheric Association (NOAA) has recently released a report that highlights the increase of small floods that cause inconvenience; by flooding roads, homes, and businesses … but without loss of life or ‘major damage’.

We all know that what is called ‘major damage’ by the NOAA can nevertheless be major headache and repair bills for those affected. But the NOAA report tells us that this “inconvenient flooding” is on the increase due to human activity and global warming. With no possibility of turning back the earth’s clock, these flooding incidents will become more and more commonplace for those living close to seas, bays, and rivers.

Margaret Davidson of the NOAA commiserated with those likely to be affected. “It’s the stuff that keeps you from conducting your business or picking up your kids from school,” Davidson said. “It is clear that changing climate and weather patterns will cause us to be increasingly inconvenienced and challenged in our everyday lives.”

The increase in the frequency of these minor flood events is anything but minor. Fifty years ago, the affected areas averaged 2.5 minor floods annually. Today, there are 14 minor flood events each year. Some areas fared even worse. Annapolis, Maryland went from 3.6 to almost 40 flooding events a year. During the same period, sea level in the Annapolis area rose by almost eight inches!

The coastal sites that were studied by the NOAA as part of this report are located on both sides of the USA — from La Jolla, California to Baltimore, Maryland. Communities that border the Gulf of Mexico are also affected. The worst-hit zone appears to be the Mid-Atlantic region, which happens to be very densely populated. Scientists predict that residents in this region will be increasingly flooded in the coming decades.

Although it is not always possible to pack up and move away from threats of this nature, there is much that can be done to protect one’s homesite or place of business. Flood panels, berms and other flood barriers, and even landscaping can be installed to ameliorate the impact of minor — and major — floods. As scientists look forward to the coming decades, there is little to indicate that flooding incidents will peak and then begin to decrease. Even the most optimistic outlooks predicts a rapid increase in coastal flooding is in the future.

Please click here to view the full NOAA Report as a PDF document.