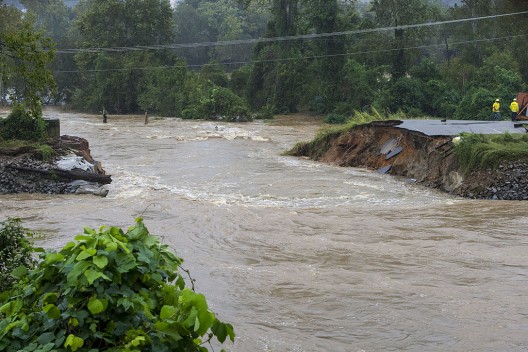 During the first week of October, a freakish storm system battered the southeastern U.S. states, particularly South Carolina. Hurricane Joaquin, which did not directly hit the region, nevertheless contributed massive amounts of precipitation to other smaller storms and then collided with a cold front that had stalled in the area. In what is being called a 1000-year event, record-smashing amounts of rain battered an entire state to a standstill. In fact, some meteorologists are predicting that this storm system, when all precipitation meters are recorded, will be revealed as the most prolific storm in the recorded history of the U.S. … ever! When the rain finally let up after a five-day torrent, 25 people had lost their lives.

Several weeks after the storm, the state of South Carolina has yet to fully recover. It is thought that it will take months to fully assess the damage to area dams and bridges, as multiple rivers burst their banks during the storm, causing devastating damage downstream. At least 18 dams were breached during the flooding, and many of these collapsed completely. Some bridges and dams that remain standing may have hidden damage or flaws that could become very dangerous during the next storm if not discovered before then. Engineers are working hard to inspect all the dams and bridges that survived the storm, even as plans to rebuild collapsed flood barriers are being prepared. In addition to the destroyed dams and bridges, many roads, including major thoroughfares, remained unsafe and impassable several weeks after the storm. A 75-mile section of I-95, the main interstate passing through the state, was closed during and after the storm, causing extreme havoc to interstate transport and commuters.

Another serious after-effect of the storm was contamination to the water supply. People were urged to thoroughly boil any water used for drinking or cooking, and to discard any ice that had been made from water after the storm. The flooding in South Carolina was so extreme, and so widespread, that the contaminated floodwaters had mixed with reservoir water, cisterns, and other water collection systems, rendering the public water supply unsafe. FEMA disaster relief funding will be available for flood survivors who sustained losses in this storm. Funds may be used to pay for temporary rentals or home repairs. For example, many homes that withstood the floods are now uninhabitable due to mold and mildew

The storm of October 2015, although not a named hurricane, will live a long time in the memories of all those who endured that five days of anxiety, fear, and an almost total disruption of daily life. In some parts of South Carolina, almost two feet of rain was gauged during the five days of unrelenting downpour, smashing records for daily, weekly, and even monthly rainfall levels — all from one epic storm. Many towns were entirely submerged, and the devastation was so widespread that almost no part of the state emerged unscathed. Although the storm is being called a ‘1000-year flood’, it is very likely that the next 1000-year flood will arrive considerably sooner than 1000 years from now.