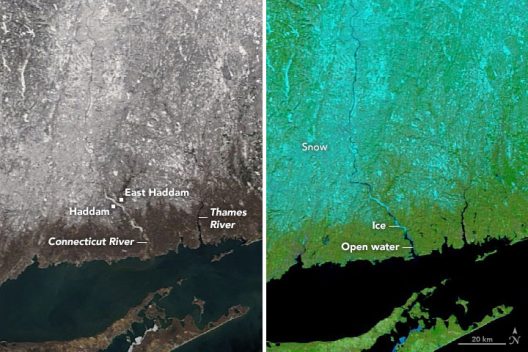 We are all too familiar with annual springtime floods that arise from a deadly combination of snowmelt and seasonal showers. But there is an unexpected threat that can sometimes produce floods when we may least expect it: in the dead of winter. Several communities in recent months have been either actually flooded or under severe flood threat when rivers and large streams began to pack up chunks of ice against rocks, bridges, or narrow culverts. The resulting jam of mini-icebergs built up against itself, then froze solid into a veritable dam that backed up still-moving water with deadly speed.

During the early months of this year, there have been many flooding events caused by ice dams that sent frigid rivers streaming onto roads, residential communities, and businesses. More than a few of these events occurred in the State of Maine, which is blessed with many wild rivers and, some would say, cursed with very cold weather. At any rate, a quick search of 2018 flooding records will turn up many floods in this state caused by ice dams.

One such flood took place in Fryeburg, Maine, when the Saco River was blocked by a huge ice dam that sent a deep sheet of water flooding across the aptly named River Street. Due to the frigid temperatures that caused the ice dam to form, the flooded water quickly turned to a thick sheet of ice that covered the road; this was very difficult to remove without breaking up the underlying road itself. Luckily, this flood did not threaten any residential communities, but it did force the closure of River Street and caused inconvenient traffic detours.

Other communities were not so lucky. The town of Kent, Connecticut suffered dreadful anxiety, inconvenience, and damage from a mile-long ice dam on the nearby Housatonic River. This ice dam backed up for miles onto major roadways and residential areas. Naturally, as soon as the floodwater intruded into roads, it froze solid into a massive block of ice that stretched for miles along crucial transportation routes. In some areas, cars and other vehicles were completely encased in a block of ice that reached halfway up to the roof. Desperate citizens called for the ice dam to be broken up with dynamite or wrecking balls, so plagued were they by the resulting “ice flood” that impacted a vast area.

Residences that are flooded during this season are similarly afflicted by the fact that ice is exponentially more difficult to deal with than is regular flood water. Hot water heaters and furnaces are typically located in cellars, and when a basement is entombed by a foot of ice it cannot even be pumped out! The home quickly becomes uninhabitable when heating systems are gripped by solid ice.

Essential services in areas that may be exposed to floods — no matter what the cause — must be protected by mechanical flood panels, geographical flood defenses, or other flood barriers if emergency response is to remain available during these disasters. Ice dams, and the unexpected and very sudden flooding that these dams can cause, are just one more reason to ensure that ALL hospitals, clinics, and fire stations remain protected by the new flood panel technologies that are available today. In this case, a penny well spent on prevention is truly worth a pound of cure.