During the middle of March, a dire warning was widely broadcast regarding a severe winter storm system that was poised to strike the U.S. Midwest. In recent years, we have been presented with several sensational new weather catchphrases, such as ‘polar vortex’ and ‘bombogenesis’. The extreme weather warning of this week was also given a horrifyingly descriptive name: we were told that the thing bearing down on a huge portion of the U.S. was called a ‘bomb cyclone’.

It turns out that these terms are not new at all, and have been in use for some time in meteorological circles. Polar vortex, bombogenesis, and bomb cyclone are all actual meteorological terms that describe specific weather conditions. For example, the term bomb cyclone is also called explosive cyclogenesis, and describes an explosively strengthening storm that is capable of unleashing immense power and destruction. That power and destruction was inflicted on a large swath of the Rockies and Great Plains regions, from Nebraska all the way down to Texas. 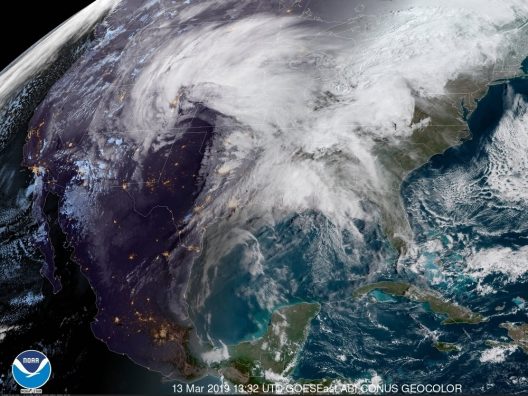 The storm itself was brutal. Interstates were shut down or blocked by debris, and transportation was all but impossible. The ferocity of the storm was unimaginable — an intense white-out blizzard made even more horrifying by hurricane-force winds — even a few tornadoes — all combined with frigid temperatures so low they were deadly in their own right. It was truly a worst case scenario!

Fortunately, the storm itself did not last long, and by some miracle there was only one fatality attributed to the blizzard. Immediately afterwards, however, a new threat gathered steam. All that snow and hail began to melt in the warmer spring weather that followed the bomb cyclone, and rivers and streams began to swell. Interstates once again became impassable, this time due to flooding rather than snow and ice.

Probably the worst-hit state was Nebraska, which suffered widespread transportation hazards; including sections of vital interstate highways closed, bridges washed out or damaged, and even a nuclear power plant reportedly under threat from encroaching floodwaters. The nuclear plant was later declared safe and operating at full steam, thanks to its advanced system of protective flood barriers. Still, more than half the counties in the state had been declared under a state of emergency, and citizens were urged to stay home if possible.

Throughout the affected region, historic floods devastated farms, homes, and businesses — with rivers cresting at 18′ or more. The states of Iowa and Michigan are also suffering from the aftermath of the bomb cyclone, and authorities continue to struggle with widespread flooding that may take weeks to recede. Although power has been largely restored, supply chains have been disrupted and goods and supplies are under-stocked in many areas.

Sadly, the farmers and ranchers that have already been struggling with other financial disasters will be the hardest hit by these unseasonal and unexpected floods. The massive flooding that has struck huge portions of this farm-dotted landscape has swept away livestock, barns, homes, fields, topsoil, and even expensive heavy equipment. For many farm families, these floods will inflict the final blow.