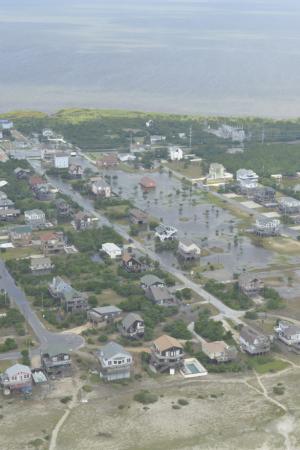 The first hurricane of the 2014 season, Hurricane Arthur, was initially feared and dreaded as it barreled up the same path taken by the infamous Hurricane Sandy a year ago. It made landfall near the State of North Carolina, and left tens of thousands of people without power. The popular resort island of Cape Hatteras was under mandatory evacuation, spoiling the vacations of thousands of visitors, and impacting tourism-related businesses on the busiest holiday of the summer season.

In the end, the hurricane moved through quickly, and did not dump the expected amount of rain, before veering northeast- back over the Atlantic Ocean. This was the best possible scenario for this event, and the heavily populated northeastern US coast was spared an ugly repeat of last year’s disaster. The storm then weakened to a Category I, and did not greatly impact other states as it moved offshore towards Canada.

North Carolina, however, did not escape unscathed. More than 44,000 homes were left without power, and there was widespread flooding. The flooding impacted not only coastal residents, but those living near streams and rivers, as the storm surge pushed massive amounts of water into the riparian zones far from the ocean.

One resident, according to a news report, could barely see the tip of the six-foot tall lamppost at the end of his driveway — the rest was underwater. In these low-lying areas, even a “mild” hurricane can inflict unimaginable property damage and millions of dollars in damage and lost income. The holiday weekend was particularly important from an economic standpoint, as frequent hurricanes during the past three years have been hammering the tourism industry.

The area most impacted by Hurricane Arthur was the Outer Banks region, including Hatteras, which was under mandatory evacuation orders. Some parts of these islands received over 8 inches of rain in a brief period of time; leading to floods, beach erosion, and downed power lines. Instead of enjoying fireworks on the Fourth of July, residents and business owners were desperately cleaning up in an effort to salvage some of the all-important holiday business.

In addition to the hurricane and the accompanying floods, several tornados were spawned by the storm. These eventually disappeared, and for the most part, the storm passed by the US eastern seaboard with relatively little damage — particularly compared to other recent storms. The good news is that people seem to have learned from Hurricane Sandy, and they took the storm seriously and got out of the way. Still, a few reckless surfers were seen heading to the beach with boards in tow.