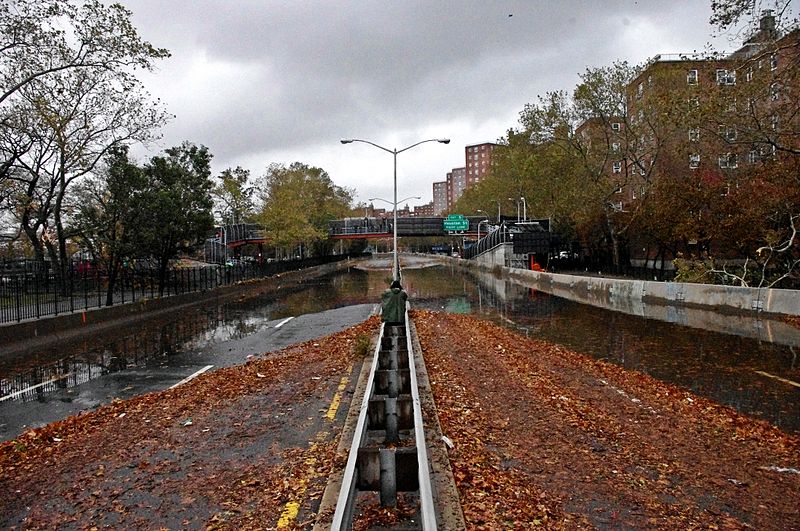 According to the New York City Office of Emergency Management (OEM) flash floods are an inherent danger throughout the city, and can happen at any time — for a variety of reasons. The website of the OEM warns that flash floods can be caused by coastal storms as well as intense rainstorms, and can strike quite suddenly, and without warning.

Flash floods can sometimes occur in areas that have no rain at the time of the flooding, because torrential rain in other areas has sent water cascading into rivers, canals, and flood ways. Flash flooding brought on by storms is a terribly dangerous situation, and is the number one cause of storm-related deaths across the US, according to the OEM.

When flash floods occur, streets become raging rivers in seconds. Cars, pedestrians, and any other object that is not bolted down gets swept away, hurtling through the avenues just like a river in a canyon. Many people will foolishly try to drive through rushing floodwater, thinking the weight of the vehicle will suffice against the flow. But water is much stronger than most would think, and if a car is hit broadside by water that is just a few feet deep, the car will not withstand the blow.

In addition to weather-related causes, sudden flooding can be caused by water main breaks, an increasingly common occurrence in NYC as its infrastructure ages. Flooding from water main breaks is usually not a threat to life, but can certainly be a threat to unprotected businesses and homes. A clothing shop that is suddenly inundated by water from a main break can lose its inventory in minutes.

Sewage back-ups are another cause of sudden flooding that cannot be predicted. In this case, not only is the water a threat, but what’s in the water! Sewage spills are a common part of life in NYC, and this type of flooding requires careful clean-up to avoid illness from the bacteria in the water. Horror stories abound of bathtubs and sinks regurgitating untreated sewage into homes and businesses, ruining belongings and inventory.

NYC is prone to flooding from many sources, and the OEM recommends taking preventive measures for any home or business that is situated in a low-lying area. Of course, this includes most of the city! The OEM suggests planting trees and other thirsty foliage around the house or business to soak up excess water, and offers a program to obtain free trees. Paving of green areas should be avoided, and installing protection for a low lying driveway or basement is very important. Pre-installed flood barriers, berms, and automatic flood panels can make the difference between inconvenience and disaster.