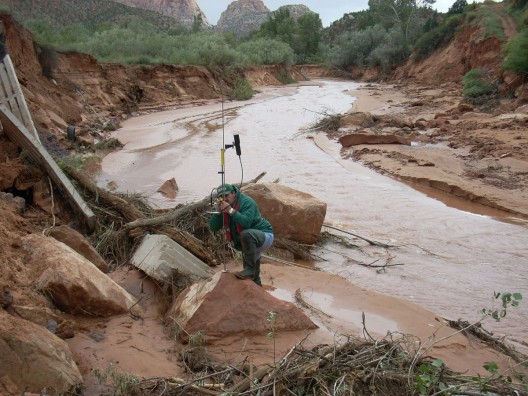 Flash floods are among the most deadly of all the flooding scenarios, because victims simply do not have enough time to get out of harm’s way. Every year, flash floods occur in the arid U.S. Southwest, and unfortunately, lives are often lost as a result. 2015 was a particularly bad year for flash flooding in the state of Utah. Freak twin storm events in September produced 2″ of rain in a very short period of time, which quickly filled creeks, canyons, and gullies. The storm has been described as a 100-year event, and the resulting loss of life was devastating. When it was over, the storm had earned a place in the record books as the deadliest storm in Utah’s history, with at least 20 lives lost.

The storm began as Hurricane Linda, but it was quickly downgraded from hurricane status as it moved into the U.S. Southwest. As it entered the arid states of Utah and Arizona, the storm dumped most of the precipitation that it had picked up in the tropics. Because the ground was rock-hard from a persistent drought, the water immediately ran off and quickly produced life-threatening conditions. At this point, the National Weather Service released its most strongly worded warning: “Move to higher ground now. Act quickly to save your life!”

Unfortunately, a number of people gathered near Short Creek to watch the rapidly rising water level. Sixteen of these bystanders were carried off by the rushing water as it suddenly rose and swept away two vehicles. This disaster resulted in the deaths of 13 people, but three children were miraculously rescued by emergency personnel. Hundreds of rescue workers and volunteers braved hazardous conditions to search for one missing child, but the river was so dangerous that their work was greatly impeded.

Another crisis occurred at Zion National Park when an inordinate amount of precipitation caused flash flooding in the Keyhole Canyon area. This popular hiking area is characterized by slot canyons- these are very narrow canyons with steep sides that allow no chance of escape when floods strike. These canyons are close to the Virgin River, and when this river rises quickly, the slot canyons can become death traps. During the sudden storms on this day, the Virgin River rose from its normal volume levels of 55 ft3 per second to 2,630 ft3 per second… in under 15 minutes.

Rangers quickly moved to close all the canyon hiking areas, but one group of seven people had decided to go ahead with the hike in spite of unfavorable weather forecasts. Trapped in the slot canyons when they filled with ferocious torrents of water, all seven hikers perished. Heroic rescue workers faced extremely dangerous conditions in an effort to locate the hikers, but to no avail.

The combined death toll of these storms was 20 individuals; 20 lives were cut short, and many other lives were scarred by sorrow and loss as a result. The lesson learned by survivors is stark: flash floods are so dangerous and so fast-moving, that the warning of the National Weather Service must be heeded immediately: move to higher ground, and act FAST to save your life!