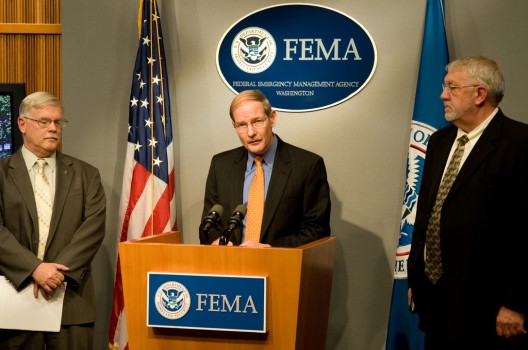 Flooding during the months of June and July in the year 2008 devastated great swaths of the US Midwest and forever changed lives in that region. Heavy precipitation in the preceding weeks caused major rivers to swell beyond their banks, breaching levees and other flood barriers. Neighborhoods were underwater for weeks at a time, and damage was estimated in the tens of billions. In addition to the financial impact, 13 lives were lost to the floods.

In the six years since that horrible summer, much has been done to prevent a repeat of the destruction. Since flooding is a natural and inevitable event, much of the new work is intended to tame, rather than to prevent floods.

One of the most obvious and important features of the recent improvement efforts has been to improve the flow of the major rivers. This is done in many ways. Dredging of channels is a fundamental improvement, and one that is an ongoing project. After a major flooding event, river basins are usually left full of debris, sediment, and vegetation. All this debris must be cleared and removed. The invasive vegetation is uprooted and destroyed, and sediment must be relocated. Sometimes the sediment may be used in the construction of levees and embankments.

Another recent improvement focus has been on a technique called “daylighting”. In this process, pipes and tubes that had been previously placed underground have been opened up to the sky. During the floods of 2008, many of these pipes were overwhelmed, and contributed to the flooding problem because they were blocked, clogged, or just too small in diameter. Now, many of these waterways have been “day lighted”, enabling them to channel more water during critical moments.

In addition to the bank-side levees, a system of setback levees have been put into place. These are levees that are far from the river — in some cases by as much as five miles. During a major flood, the river breeches its immediate levees and is permitted to inhabit the land up to the secondary, or setback levees.

In spite of the best efforts of the US Army Corps of Engineers, floods are never completely controllable, and a sturdy system of levees and other flood barriers can sometimes increase the risk of a major disaster. This happens because the natural floodplains are eventually subjected to development — since these areas are usually dry, the temptation to build homes and businesses overwhelms common sense. People seem to feel that the levees will forever protect them from disaster, but that is not the case. Floods will inevitably occur, and levees will inevitably be breeched. For this reason, natural floodplains should never be developed, but rather maintained as an important defense against catastrophic flooding.

The major rivers of the US Midwest will flood again and again throughout history. This fact cannot be altered. But the recent improvements along the rivers’ routes will help to prevent loss of life and alleviate property damage for a few years at least. Then it will be time to do it all again.