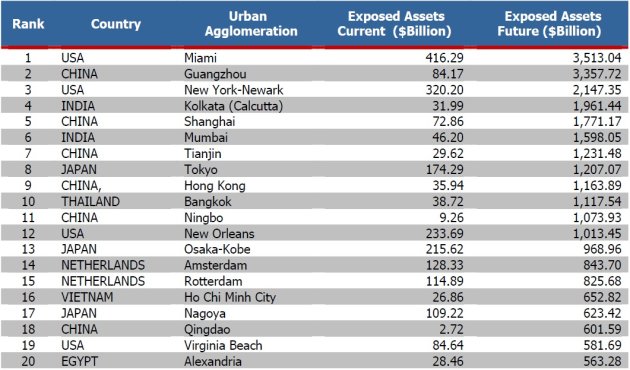 Analysts for the OECD (Organisation for Economic and Co-operation Development) ranked major cities in terms of population and ‘assets’ to a 1-in-100 year flood event now and in the future.

As daunting as these sums may seem, they are dwarfed by the bills that have been projected for the future, as sea levels rise and more assets continue to be packed into these desirable areas. A recent study has concluded that flood losses in US coastal cities may well quadruple by the year 2050, unless stringent efforts are made to ameliorate the risks.

In fact, the three cities mentioned above will account for a staggering 31% of all losses GLOBALLY unless extreme measures are taken to defend them against the floods of the future. By all estimates and computer projections, the floods of the future will increase by an order of magnitude of up to 50. This means that coastal cities must now prepare to defend themselves against storms that are many times more destructive than hurricanes Sandy or Katrina.

Failure to prepare for these future super-storms will result in crippling losses that can break the global economy. Without making changes, by simply going along with the present level of flood protection, flood damages will soon be measured in the trillions of dollars, rather than millions.

Conversely, if US cities plan well and adequately prepare for the coming challenges, flood losses may be held at reasonable levels. With proper flood protection measures in place, losses could be kept as low as $50 million in the year 2050. These studies clearly tell us that flood protection, prevention, and preparation is many times cheaper than cleaning up the mess after a major storm. Upgrading flood defenses will provide a huge economic payoff, while complacency could literally destroy major economies.

Experts agree that flood preparation and prevention is crucial to the survival of coastal cities. Sea level rise, coupled with ever-increasing population and, in some cases, the tendency of some low-lying areas such as New Orleans and Miami to actually sink- presents a major threat to financial assets and human life. Defenses will need to include flood barriers, sea walls and levees, pumping and bilging, and very stringent planning for new construction.

There are many aphorisms that express this prudent approach: ‘a stitch in time saves nine’ or ‘an ounce of prevention is worth a pound of cure’. When it comes to preparing for the mammoth storms that are certain to pound the coastlines in the coming decades, these aphorisms hold a wealth of wisdom. The real challenge will be to make sure preventive measures are already in place BEFORE the storms arrive.