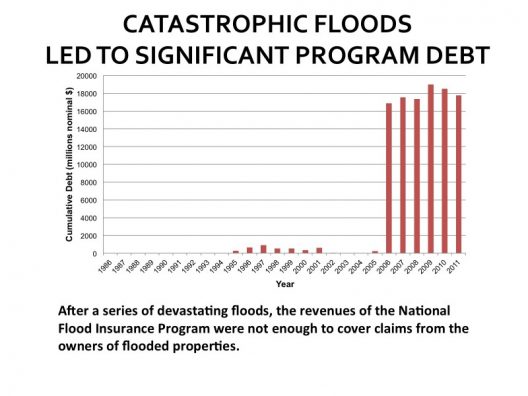 It’s that time of year … no, not the holidays, but that time of year when Congress takes another look at the National Flood Insurance Program (NFIP). This has become something of an annual legislative ordeal, and has been since Hurricane Katrina in 2005. Prior to Katrina, the debt that had been accrued by the NFIP were paid off every year, and the program was relatively stable and sustainable. Hurricane Katrina, however, left massive insurance payouts in its wake, and these debts could not be paid off as they had been in previous years. Today the NFIP is in debt to the US Treasury to the tune of $23 billion!

The predicament has become much like that of many ordinary people who carry large sums on their credit cards. At first, the situation seems manageable, and the debtor is happy enough to push the responsibility for repayment into the future as far as possible. Soon, however, the interest on the old debt combines with new debt to form a veritable monster of a balance, all but guaranteeing that it can never be paid off. In the worst case scenario, the debtor is doomed to an endless payment schedule that covers only the interest!

This nightmare scenario is close to the case of the NFIP at the present time. It is small wonder that Congress has chosen to apply a bandaid to the program each year for the past decade, because making the real changes needed to truly fix the program will be insanely expensive and unpopular. In addition to these already considerable obstacles, there are many other impediments to fixing the NFIP; including the projected huge increase in flooding events due to climate change, and a large number of currently insured properties that have flooded repeatedly.

Please click graph to view the National Academies of Sciences’ slide show explaining their proposal for Community-Based Flood Insurance in a new window.

This year, many in Congress would like to see the NFIP privatized. Depending on one’s point of view, this idea is either a great plan or a potential disaster. Many people in Congress, as well as their constituents, will applaud the prospect of removing the federal government from the flood insurance business. These people may say that taxpayers should not be on the hook for poor choices made by those who own property in flood-prone areas. Others may look at the results of past privatizations, such as various penal institutions, private contractors in foreign war zones, or utility services and voice well-founded alarm. When a service is conducted by a private enterprise, profit is sometimes valued above concepts of fairness, the overall good of the community, or even safety.

So this spring, as Congress once again examines the NFIP, it is likely that Congress will look at ways to extricate the federal government from the program, replacing the program with private insurers. This development, should it materialize, will send many owners of risk-prone properties into a state of panic, because they will likely be excluded from the rolls of any company operating purely for profit. As the original purpose of the NFIP was to avoid this very situation, it would be an unfortunate end to a program designed to alleviate suffering and hardship.