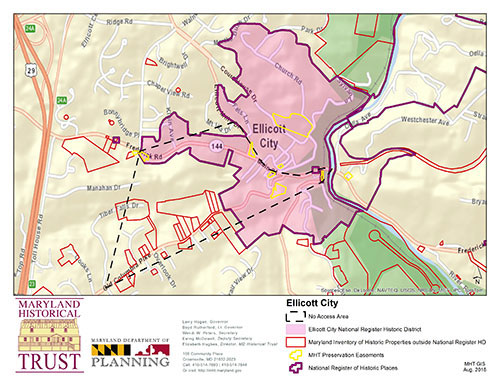 As we approach the one-year anniversary of the historic floods that wiped out the quaint Main Street business district of Ellicott City, Maryland; a visit to the area reveals much progress, but also evidence of lives changed forever. Two lives were lost during that horrible flood, which occurred on July 30, 2016. The friends and family of those two people will never be the same, and many who were injured are also still struggling to recover fully.

In addition to these tragic human losses, there was also massive damage suffered by businesses and other property owners. Ellicott City is situated in a highly vulnerable location, nestled in a valley of the mighty Patapsco River, which normally flows placidly through the area. Canals shoot off from the main river, and in bygone days mules would be seen pulling barges up and down the canals to areas of commerce. Ellicott City was one such commercial hub, and milling was the main industry. Many years ago the canal barges brought raw corn, paper materials, and lumber to the mills of Ellicott City, and the fact that the mills were directly off the canals made this commerce convenient. The city thrived, and during the 1800’s Ellicott City became one of the most important manufacturing and milling towns on the entire east coast.

However, the vulnerability of the town’s location also resulted in frequent floods, and Ellicott City was all but wiped off the map many times over the past two centuries. Since the year 1817, the town has suffered 16 extremely devastating floods, with many lives lost and unimaginable property damage. Homes, businesses, vehicles, and livestock were swept away over and over again.

As bad as these historic floods were, they all pale in comparison to the flood that destroyed Ellicott City last summer. This flood will go down in history as the worst … at least for now. Meteorologists are calling the flood of 2016 a ‘thousand-year flood’, a description that may provide false hope to the town’s residents and shopkeepers … because it is likely to happen again sooner than that. Whereas Ellicott City was once a gritty factory and mill town, it is today a genteel and affluent community with a Main Street lined with antique shops and trendy, high-end restaurants. For this reason, the dollar amount of the property damage was much, much higher than may have been expected from such a small town.

This map shows the Ellicott City National Register Historic District, and surrounding areas, that were affected by the recent flooding in Ellicott City. Click on the map to enlarge it.

Four months after the flood, almost half of the businesses along Main Street were still not reopened. Debris was still piled up here and there, and infrastructure such as bridges, roads, and sidewalks were still in the process of being repaired or replaced. The delay in reopening the former businesses or replacing them with new ones cast a pall over the once-bustling Main Street. After the flood, millions of dollars poured in from donors and grants, and the effort to restore Main Street was underway almost immediately. But many business owners elected to move away from the vulnerable flood zone, while others found that their expensive flood insurance policies were not being honored by the insurance companies. This delay in getting the city back on its feet meant that many visitors went away disappointed, and this is never good for business.

The historic Main Street of Ellicott City reopened for business just three months after the flood, and today the street is once again thronged with shoppers and tourists. But those who lived through the flood at close hand will never again look at the quaint district the same way- and they will live in dread of the next deluge.