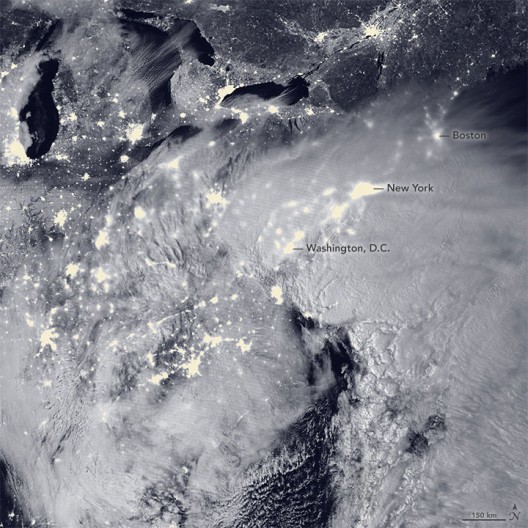 Winter storm Jonas roared through the southeastern parts of the U.S. on January 22-23, bringing record-breaking amounts of snow that adversely affected 50 million Americans. The storm was projected to be a sort of winter hurricane; bringing winds of 60mph, widespread power outages, ‘thunder-snow’, and massive snowfall that would bring cities like Washington DC and New York to a standstill.

In reality, many of these dire projections did not occur, and the storm was a bit milder than had been projected. The 60mph winds did not materialize, although high winds were a problem in many area, and high-profile vehicles were warned to stay off the roads during the storm. Jonas was a particularly dangerous type of storm, one that has struck fear for many centuries: it is called a nor’easter. Nor’easters are named for the direction from which the winds are moving across the land, and they are known to bring very heavy precipitation, hurricane force winds, blizzards, severe coastal flooding, and powerful storm surges that can devastate coastal communities.

During winter storm Jonas, many communities suffered from a snowfall that accumulated 2-4 inches of snow per hour… for almost 24 hours. Snowfall records were set in Baltimore, MD, Allentown, PA, Harrisburg, PA, Newark, NJ, and parts of New York City, with records dating back to 1892. The city of Philadelphia received as much snow in that one day as is normally recorded for an entire year!

With all that snow, flooding does not seem likely to be a major concern; at least, not until the melting begins. But that was not the case. Jonas brought major flooding in several areas, even before the first snowflake melted. Particularly hard hit were the Jersey Shore communities, which have yet to fully recover from Hurricane Sandy. In fact, many residents are comparing the two storms, so destructive was this winter storm in terms of flooding. One Jersey Shore community, Cape May, recorded its highest storm surge ever, at almost 9.5 feet. The tidal flooding in these communities brought widespread power outages, major flood damage, and scenes of city streets flooded with icy water dotted with mini-icebergs.

The more widespread danger from flooding may be still on the horizon, however. As communities focus on clearing the massive amounts of snow from streets and parking lots, warmer weather is forecast for Tuesday, along with rain showers. This warm rain could melt the snow much faster than the frozen ground can absorb, and a flooding disaster could result. As if this is not bad enough, more snow is predicted for later in the week! When all this new snow, melted old snow, and rain converges upon super-saturated and/or frozen ground, a severe run-off problem will likely result. When all is tallied, flooding may be the most surprising, and damaging, aspect of winter storm Jonas.