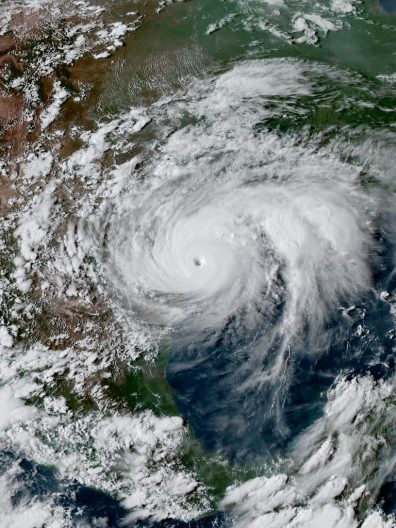 Anyone landing at the Houston International Airport on a clear day will enjoy a sweeping view of the coastline, as well as the spit of sand called Galveston Island. The Gulf of Mexico looks serene on a day like that, and the beaches look welcoming and bright — even from an altitude of 30,000 feet. But one can’t help imagining what might happen to all that low-lying coastline, crowded with homes and business, if it were to be struck by a major hurricane. In late August 2018, just that happened.

Hurricane Harvey approached the Texas coast as a relatively meek tropical storm, having spent itself and reformed several times during its trip through the Caribbean. Unfortunately, just before the storm made landfall in southeastern Texas, it intensified into a full-blown Category 4 hurricane with tornado-like winds inside the storm. This would not be the minor storm residents and officials had hoped for — it would be a very, very dangerous hurricane. Mandatory evacuations were quickly ordered, and Texas Governor Greg Abbott drove home the seriousness of the situation when he advised all those who ignored the evacuation to print their name and social security number on themselves, so that they could be more easily identified.

Hurricane Harvey near the coast of Texas at peak intensity late on August 25, 2017. ABI image captured by NOAA’s GOES-16 satellite.

Even this dire advice did not dissuade many residents who rode out the storm in vulnerable houses, flimsy trailer homes, and even boats! Some of these people wished to remain with their belongings, while others were too poor or infirm to evacuate. Most immediately regretted their decision to stay, and witnesses described a veritable tsunami-like wall of water and wind that sounded like a jet engine. At that point, there was nothing to do but hang on and hope for the best. When the calm eye of the storm passed over the coastline, many people who had been blasted by the storm scurried out of hiding to seek stronger shelter, but very soon the eye was followed by the second wall of the hurricane. Once again, the winds, rain, and storm surge hammered the coastline with a force that was beyond belief. When the storm had finally passed, many of those who had survived the storm were deeply traumatized

In this part of the world, it has been almost a decade since any major storm — not since Hurricane Ike in 2005 had any hurricane hit Texas. And we would have to look back a full 56 years to recall a hurricane of similar intensity — Hurricane Harvey will remain indelibly burned on the memories of every last person who lived through it. The stats of the storm beggar belief: over four FEET of precipitation fell in some places, and many spots received the equivalent of a full year’s rainfall in a couple of days!

Adding to the destructive power of the wind and rain is a substantial storm surge of over 6 ft. A storm surge is a massive wall of seawater that is mounded up by the storm and slammed onto the coastline. A surge of this size can overwhelm flood barriers, sea walls, and other flood defense measures; leaving homes and other buildings inundated. In fact, it is the flooding that caused the most damage in the Houston area. Officials warned that the weakened storm would turn around to drift back over the same ground. It became a slow-moving storm, without the destructive winds it once had, but still FULL of rain. It dumped even more precipitation on the already flood-ravaged zone.