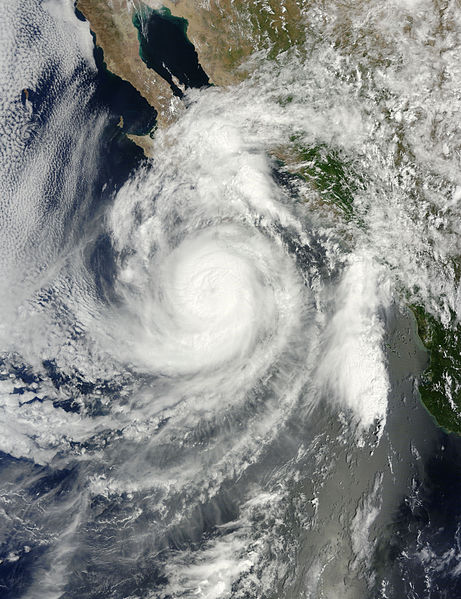 Flash floods last week in the states of Arizona and Nevada have smashed records and have caused major damage and chaos throughout the region. Two people in the Tucson area died as a result of the flooding, including a 76-year-old woman who was swept away after her car was lifted by the rushing water.

Another woman was killed when her car was completely submerged on a flooded road. Rescuers tried desperately to free her in time, but the woman was already dead when they managed to pull her from the car. The roiling water that covered this road was said to be up to 12 feet deep.

In addition to countless surface roads affected by the flooding, a large section of I-15 was completely washed away, leading to horrific traffic snarls and impeding the movement of rescue vehicles. The Governor of Arizona immediately declared a state of emergency, and schools were closed in an attempt to minimize loss of life.

The flooding is being blamed on Hurricane Norbert, which formed near Mexico and then moved north in an uncharacteristic fashion. The storm was still dangerous for days, moving northeast, bringing flooding and dangerous conditions to other areas as meteorologists had predicted.

In Phoenix, precipitation records that go back to the year 1895 were smashed. The area recorded more rainfall in one 24-hour period than has ever before been recorded — with more rain in that one day than the area usually records in the entire months of July, August, and September. The total precipitation for the day was 3.29 inches, while the record from the previous record-holding year, 1895, was 2.91 inches.

While 3 inches of rain does not sound like enough precipitation to cause the kind of massive damage that occurred that week, it must be remembered that in this type of arid topography, any rain that falls immediately runs off the land — it simply cannot be absorbed by the rock-dry ground. Although the cities of Tucson and Phoenix have put flood barriers and run-off channels into place, theses defenses were nearly overwhelmed. During this storm, several critical dams and other flood barriers came within inches of being breached. The fact that the flood barriers held up prevented many more deaths in the region.

While these regions typically struggle with seasonal monsoons, the monsoon rains are usually more localized and do not affect all of the region at once. With a large area affected, there is nowhere for the run-off to go; this is what caused the disaster during that week. It does not bear thinking about what would have happened had the region not had flood barriers and run-off channels in place. A major disaster occurred in Nevada and Arizona, but it could have been much, much worse.