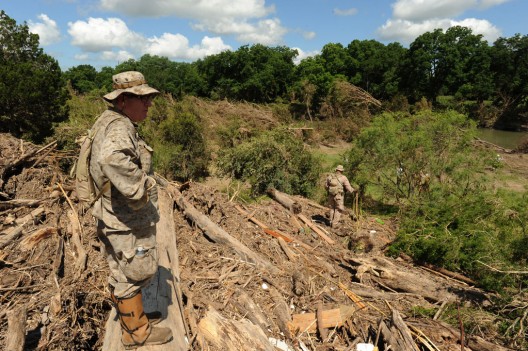 Severe flash flooding in the states of Texas and Oklahoma has taken the lives of at least 17 people, and has swept away hundreds of homes. With as many as 12 people still not accounted for, the death toll may well rise, in what is being called some of the worst flooding in living memory. There are still many inhabited areas that have not been reached, as continued bad weather has grounded helicopters and impeded ground search crews.

San Marcos, TX — Members of the Texas State Guard continue to search the banks of the Blanco River to look for missing residents. Extensive flooding impacted the area, resulting in a Presidentially declared disaster. Jocelyn Augustino/FEMA

The affected area is crippled, and rescuers must contend with downed power lines, collapsed bridges, and debris that completely blocks major roadways. Authorities report that some residential streets have been swept free of homes, with only the foundation slabs remaining. Hundreds of residents have been evacuated, and with more rain in the forecast, it is unlikely that they will be able to return home soon.

The precipitation that caused this extreme flooding event has broken records for the area. In some parts of central Texas, as much as ten inches of rain has overwhelmed flood defenses, jumped riverbanks, and completely saturated the ground. The Blanco River, near San Antonio, Texas, rose at least 33 feet in the course of just three hours, reaching a level that was an incredible 27 feet above flood level, according to weather.com. The crest smashed the previous record that was set in the year 1929, and as gauges have stopped working, the true scale of this flood will never be recorded. Some observers likened the flooding on the Blanco River to a tsunami, with a gigantic wall of water that crushed everything in its path.

Meanwhile, more rain is forecast for this ironically drought-stricken zone. If as little as 2-3 inches of additional rain materializes, as meteorologists predict it will, there will be more flash flooding, with further loss of life and property damage.

At this time, over a thousand people are in emergency shelters, and these people are counting themselves lucky compared to those who lost their lives or those who are still stranded in flooded areas. Authorities are warning people to stay put, and are emphasizing the usual safety advice of the national weather service: “Turn around, don’t drown!” Many of the drowning victims during flash flooding events are people who attempt to drive through floodwaters in vehicles, which is a very dangerous choice, as even two feet of water can sweep away a vehicle.

At this moment, rescuers are still working around the clock to evacuate stranded people, locate the missing, and recover the remains of those who have perished. In these flooded parts, the Memorial Day weekend of 2015 is destined to go down in history as one of the most memorable of all time — for all the wrong reasons.