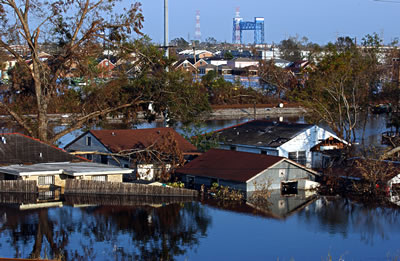 On January 30, 2015, President Obama signed Executive Order 13690, a move that will have far-reaching effects on federal and local flood management, community building policies, and the insurance industry. The new Executive Order (EO) will amend and replace the previous EO regarding federal Floodplain Management, which was established in the year 1977.

This new EO will detail three new methods that federal agencies may use to designate the flood hazard or risk of a new construction project site. These methods are:

This new EO will be subject to a 60-day public review period, during which time public meetings will be held to gather comments and ideas from citizens and community officials. This input will be considered when finalizing the new guidelines, which will begin to be implemented 30 days after the close of the public review process.

The new EO applies only to federally funded projects. The idea behind the order is to ensure that new infrastructure projects are built to last, and that they will be prepared to withstand conditions that may exist in the future, a future that may be radically altered by climate change. Given that flooding is the most expensive hazard to our national infrastructure, it seems prudent to require that new projects be able to weather threats both present and future.

As with any new guidelines, however, there are those who are disgruntled about the ramifications for themselves or their community. Areas of very low elevation, as may be commonly found in Louisiana and Florida, will find it very difficult — in some cases impossible — to comply with the new guidelines. U.S. Senators Bill Cassidy and David Vitter (R-La.), have, along with six other Republican representatives, signed a letter to President Obama questioning the legitimacy and feasibility of the new order.

Meanwhile, federally-funded projects that are already underway must be halted in order to assess compliance with the new guidelines. In order to continue receiving federal funding, will the projects be required to comply, or will they be “grandfathered”? This is just one of the questions that must be answered in the coming months. The guidelines are expected to be reviewed, commented upon, modified, finalized, and implemented by mid-May of this year.