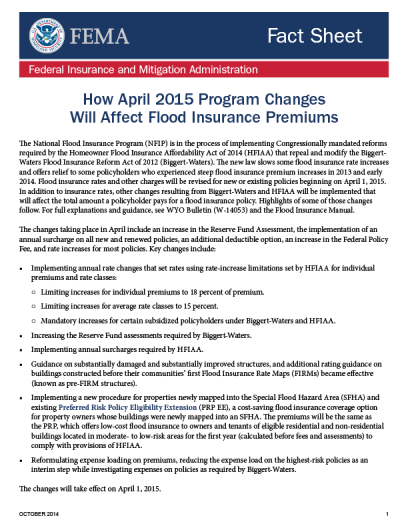 Just over one month ago, President Obama signed the Homeowner Flood Insurance Affordability Act, making it law throughout the country. This new law will affect many homeowners and businesses- some of whom will be pleased with lower rates, while others may be dismayed by new surcharges.

Here is a look at the new law (click image to view PDF in a new window):

The new law lowers the recent rate increases on some policies, prevents some future rate increases, and adds a surcharge to all policies. The Act also repeals certain rate increases that have already gone into effect and provides for refunds to those policyholders.

FEMA will be working with Congress, the private “Write Your Own” insurance companies, and other affected entities to implement these Congressionally-mandated reforms. FEMA will also be working toward the goals of helping families maintain affordable flood insurance, ensuring the financial stability of the NFIP, and reducing the risks and consequences of flooding nationwide. FEMA will continue to identify and publish special flood hazards and flood risk zones as authorized and required by Congress.

The changes mandated by the new law will not happen immediately. While the new law does require some changes to be made retroactively, applying to certain policies written after July 6, 2012, other changes require establishment of new programs, processes and procedures. FEMA’s first priority will be to stop policy increases for certain subsidized policyholders as outlined in the Act. Some refunds will be issued, but this will affect only a small percentage of the overall NFIP policy base.

In accordance with the new law, FEMA will work to develop and finalize its guidance and rate tables within eight months. The law provides Write-Your-Own (WYO) insurance companies between six and eight months to implement the changes and update systems to implement the new law. FEMA is working closely with the WYO insurance companies to develop a timetable for processing refunds expediently.

The new law requires gradual rate increases to properties now receiving artificially low (or subsidized) rates instead of immediate increases to full-risk rates required in certain cases under BW-12. FEMA is required to increase premiums for most subsidized properties by no less than 5 percent annually until the class premium reaches its full-risk rate. It is important to note that close to 80 percent of NFIP policyholders paid a full-risk rate prior to either BW-12 or HFIAA, and are minimally impacted by either law. With limited exceptions, flood insurance premiums cannot increase more than 18 percent annually. There are some exceptions to these general rules and limitations.

The most important of these exceptions is that policies in the following categories will continue to see a 25% annual increase until they reach their full-risk rate: