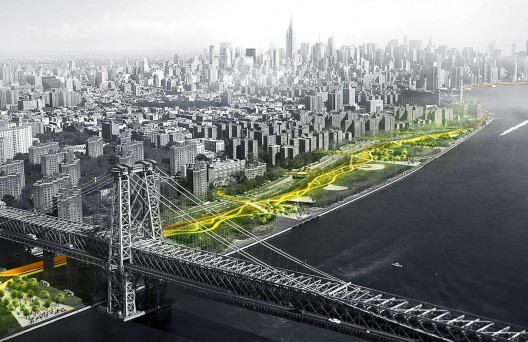 In the aftermath of Hurricane Sandy, an aggressive planning process was put into place to prevent future disasters in New York City. The process included a competition to design new flood defense projects, and the results were stunning. One of the most interesting and beautiful projects that emerged from this competition has been dubbed the Dryline Project.

The Dryline Project was designed by a Danish firm called the Bjarke Ingels Group (BIG). The project is extremely ambitious and aesthetically very pleasing. Dryline envisions a green ribbon of inviting parks, paths, and wetlands that cleverly conceal berms, flood barriers, and flood panels that will pop into place in the event of flooding.

One of the central features of the plan consists of a series of ‘bridging berms’, that would be installed all around the waterfront, protecting the low-lying areas of Manhattan. It would essentially be a raised berm of earth that is beautifully landscaped with soil-holding vegetation. This green belt of raised earth would serve two purposes: protecting homes and businesses in vulnerable Manhattan, and providing recreational opportunities and beautification of the waterfront areas- to be enjoyed by everyone. Included in the plans are a series of public pools, cycle paths, art spaces, and a multitude of improvements that could become a world-famous tourist attraction- all while providing robust flood protection for the city.

The BIG designers envision the Dryline project as something that will attract people with its recreational and aesthetic appeal, all the while concealing state-of-the-art flood protection that will deploy automatically. During dry conditions, the automatic flood panels will be placed in such a way as to maintain sea views and access to the waterfront. Raised platforms that are actually flood barriers will be used for open community classes such as martial arts or exercise groups.

One interesting aspect of the planned improvements would include a “reverse aquarium” near the waterfront. This aquarium is envisioned as a part of the huge flood-wall that will feature a very thick pane of clear plexiglass, enabling viewers to see the underwater world that exists off the Manhattan shoreline. The reverse aquarium offers seating areas for those wishing to contemplate the undersea vistas, and it also includes signage that explains rising sea levels and the changes wrought by humans upon the planet.

As the planet warms up, hurricanes and destructive storms will become more and more frequent- and more deadly- in the densely populated US East Coast. Projects like Dryline may not fully prevent storm damage, but they will go a long way towards minimizing the impact from these inevitable events. And when the project combines flood protection with beautifully designed pavilions, recreational opportunities, and lovely public green spaces- everyone wins, even during dry weather.