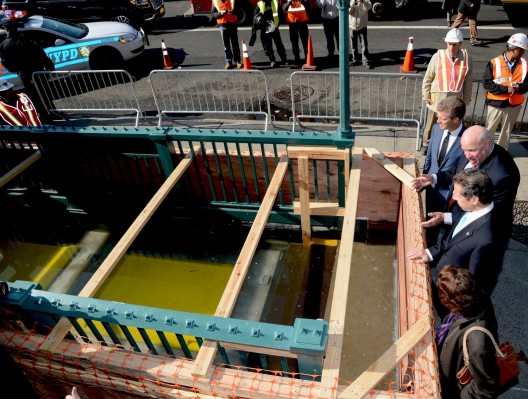 New York City was struck by devastating flash floods in the year 2007, followed by massive damage from Hurricane Sandy just five years later. During both these events, the transit system of the metropolis suffered catastrophic destruction, from which it is still recovering. Not surprisingly, those who are charged with maintaining the NYC transit system are eager to avoid any repetition of this scenario.

The NYC transit system is operated and controlled by the city’s Metropolitan Transit Authority (MTA), and ever since Hurricane Sandy this agency has been literally going to the ends of the earth in order to protect the transit system from future storms and floods. Officials from the MTA’s infrastructure and facilities department have explored the flood-proofing solutions used in other parts of the world — from South America to Tokyo — without finding the definitive protections needed by the huge transit system that serves NYC. Lacking a ready-made solution, engineers and planners have made the decision to create their own flood defense plan.

The first step was to examine the vulnerabilities of the transit system, and to determine the most critically important areas; equipment and infrastructure that needed absolute protection from floodwaters. It was not difficult to find the vulnerabilities. Every manhole cover, ventilation bay, subway access tunnel, access stairway, and even the main subway train station itself currently allows storm water to flood into the underground tunnels and stations. Nine of the NYC subway tunnels pass beneath rivers and other waterways, making them extremely likely to fill with water in a big storm. But already, ingenious devices are being developed and implemented.

Let’s take a look at the problem of the ventilation bays and manhole covers. These access points are necessary for underground ventilation as well as access for repairmen. Located directly on the street or sidewalk, they are extremely leaky and admit water freely, even in the smallest storm. However, they cannot simply be made watertight, because ventilation from these points is required below. Now, a clever flood barrier has been devised explicitly for these access points. The device is a tube or box that descend down into the ventilation bay or manhole, with a remotely-controlled switch that can be activated to close the box at the bottom. The ventilation bay or manhole is then sealed off by the flood barrier, and it simply fills up without allowing the water into the underground subway tunnels.

Another example are the flexible flood panels that can be deployed over pedestrian stairways leading down into the subway. These lightweight, flexible, yet super-strong flood panels seal off these critical entry points, holding back massive amounts of water that would otherwise go rushing into the station and tunnels.

Although the NYC MTA is performing work and laying plans that is of critical importance to the city, there have been accusations of wastage and redundancy, as the MTA is said to be working independently of the global plan to protect NYC from storm flooding and rising sea levels. In her series entitled Stormproofing the City The Guardian’s Lilah Raptopoulos interviews John O’Grady of the MTA, and he defends his work as necessary and critical. “There’s always the potential for overlap,” he explains, “but sometimes you have to fix things while you’re waiting for that overlap to materialize. And I think the best course of action is for each of these agencies, like Con Edison, Transit, and the Department of Environmental Protection, is to go about fixing and hardening their systems while the global approach works through its necessary environmental and funding process.”