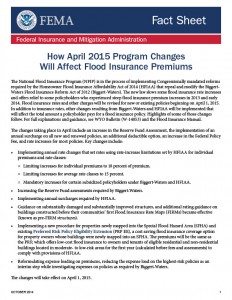 Please click on image to view PDF document in a new window.

In April of 2015, changes to the National Flood Insurance Program (NFIP) will be implemented. These changes will bring some minor relief to some, and pain to others. The changes are mandated by the Homeowner Flood Insurance Affordability Act (HFIAA), which was passed by Congress in 2014.

After the major storm events that struck the heavily populated US East Coast in the past few years, changes were made to federal flood plain maps. These changes placed thousands of properties newly inside the flood zone, thus requiring them to obtain flood insurance for the first time. The addition of many new properties led insurance companies to raise rates precipitously in 2013, and many homeowners were unable to afford the now-required insurance.

For this reason, Congress decided to modify the Biggert-Waters Flood Insurance Reform Act, which had been passed in 2012. The situation had changed rapidly since the passage of this legislation, and the law now resulted in consequences that had not been intended: onerous and steep increases in insurance rates for homeowners.

The HFIAA will help offer some relief to beleaguered homeowners in the following ways:

These changes, while helpful, fall far short of the relief many property owners were hoping for. Faced with sudden, newly mandated flood insurance requirements, many homeowners have failed to buy the insurance, or have dropped existing policies when the rates skyrocketed. FEMA, on its website, starkly warns homeowners against this course of action. Properties without flood insurance will not only face the spring flooding season without any protection, but will suffer additional rate increases as a result of dropping the insurance or failing to get new insurance coverage by the deadline.

A quick look at the “relief provisions” of the HFIAA reveals the dire situation that many homeowners are facing. For example, the HFIAA caps rate increases to ‘only’ 18% … but that is still a huge and unaffordable increase for many households. Although the US economy is said to be strong, and unemployment is low, wages have not kept pace with rising costs, and many families are still struggling.

In the same vein, although the HFIAA does provide “economical” rates for new policies, but these reduced rates are in effect for the first year only — after which the homeowner will face the 18% increase in rates. In summary, it appears that the HFIAA changes, while better than nothing, will still leave many property owners in a very difficult position.