Scientists say Hurricane Harvey was a 1000-year flood event, considered so rare we are unlikely to see anything like it for some time. However, there is a chance, albeit a small one, that the U.S. could see a storm of that magnitude again this year.

Consider other memorable storms. Hurricane Andrew, which devastated Florida and the Carolinas in 1986, was called a 100-year event. In 2005, Hurricane Katrina, another 100-year storm, flooded New Orleans. Sandy, the hurricane that famously flooded New York City in 2012, was dubbed a 700-year storm. After Harvey rolled through Houston last year, 100-year-storm Irma brought historic flooding to the Florida Keys and Gulf Coast.

A common misconception is that these seemingly rare events can only happen once in a given period of time. Using this logic, a 1,000-year flood is an event that occurs just one time in 1,000 years. In fact, a 1000-year flood actually has a 1 in 1000 chance, or a .1 % probability, of happening in any given year.

So, should we plan for another catastrophic flood event in the U.S. this year?

The answer lies in understanding the probability of natural hazard events. According to the National Weather Service, the probability of another 500-year flood this year in Houston is .2 % or 1 in 500. NWS explains, “If a 100-year flood event occurs, that does NOT mean that people are ‘safe’ for 99 years. The risk of having the flood in any given year is the same.”

To understand probabilities for a 100-year flood, roll the dice. 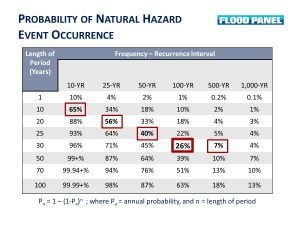 Houston should have been ready for Harvey. It had already endured consecutive 500-year floods in 2015 and 2016. The frequency of these so-called “rare” flood events in recent years makes a strong case to plan for events that are unlikely to happen, but can and do happen.