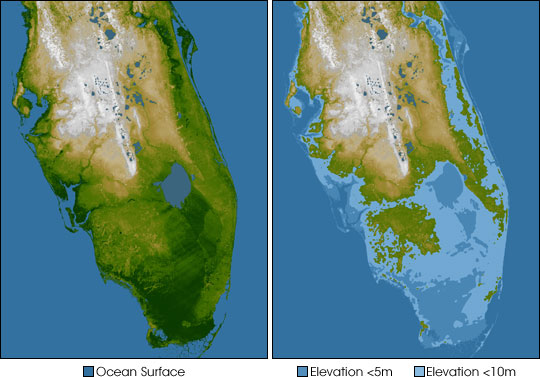 Residents of low lying regions, such as Florida, have new reasons to worry after new research has revealed that sea level rise will occur much faster than had been previously predicted. The earlier estimates called for a sea level rise of about one meter by the end of this century. However, these calculations did not factor in significant melting and shrinkage of the ice sheets in Antarctica, which climate scientists had thought to be more or less stable. Now it is known that these ice sheets are not stable at all, and are in fact collapsing precipitously. The new information doubles the expected sea level rise; from one meter to two meters by the year 2100.

For Florida, which has many residents and much critical infrastructure close to the shoreline, this news is disheartening to say the least. A rise of two meters will incur great damage to many important municipal areas, including Miami, Fort Lauderdale, Fort Myers, and Tampa. Particularly hard hit would be the Everglades, which would be awash in salt water incursions that could spell the end of this unique ecosystem. The famous (and densely populated) Florida Keys would also be grievously affected, with up to 50% of the current land mass slipping beneath the waves. As of today, almost 80,000 people live in the Keys. If the current projections for sea level rise become a reality, or if these dire predictions are even surpassed by our failure to reduce greenhouse gases, many of these 80,000 people will lose their homes and communities.

The very low topography of southern Florida is evident in this color-coded shaded relief map generated with data from the Shuttle Radar Topography Mission. The image on the left is a standard view, with the green colors indicating low elevations, rising through yellow and tan, to white at the highest elevations. In this exaggerated view even those highest elevations are only about 60 meters (197 feet) above sea level. For the view on the right, elevations below 5 meters (16 feet) above sea level have been colored blue, and lighter blue indicates elevations below 10 meters (33 feet). This is a dramatic demonstration of how Florida’s low topography, especially along the coastline, make it especially vulnerable to flooding associated with storm surges. Planners can use data like these to predict which areas are in the most danger and help develop mitigation plans in the event of particular flood events. Image Courtesy SRTM Team NASA/JPL/NIMA. Source: earthobservatory.nasa.gov

Unfortunately, sea level rise is not the only dreadful consequence of unchecked carbon emissions. It is now known that weather patterns will be altered in such a way as to greatly increase both the frequency and intensity of storms — and this is already happening in the present day. Ferocious storms, in combination with rising sea level, spells flooding disaster for major metropolises around the world: from New York to Jakarta. Even at current the sea level, cities like Boston and Tampa are extremely vulnerable to the major “100-year” storms that seem to hit annually these days. At the turn of the next century, only 84 years from now, some of these huge population centers may no longer be defensible. A worldwide retreat from the coastline will most likely take place … unless carbon emissions are brought under control in time. Scientists have previously predicted these dire consequences for the planet, but now the damage may well be suffered by people alive today, not by our unborn descendants.

While many countries are working to reduce carbon emissions, the new research in Antarctica indicates that significant reductions in greenhouse gases must take place quite soon in order to stave off disastrous sea level rise which will doom coastal regions around the world to incessant floods and inundation by the seas. Incredibly, scientists have discovered that the entire planet is already wobbling on its axis in a new and different way — this is caused by the planet’s shifting weight distribution as ice melts at the poles and in Greenland. The good news is that it is still not too late to alter this future of flooding and storm surge — we need only work cooperatively to bring the emissions to a safe level. New technologies like solar, wind, and biomass energy production, if adequately funded and supported by prudent legislation, can help reduce our dependency on fossil fuels. If nations around the world get serious about abandoning dirty technologies, the ice sheets of Antarctica may still be salvageable … along with the cities of New York and Mumbai.