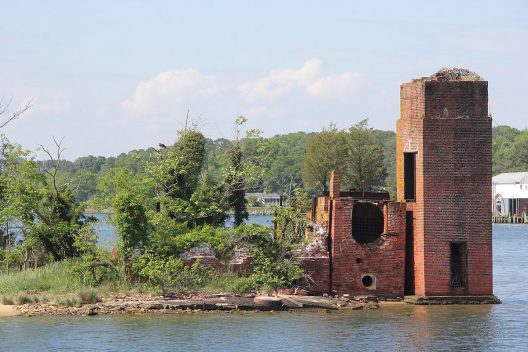 When one hears the name, “Tangier Island”, pleasant thoughts of tropical vistas with swaying palm trees might come to mind. But in reality, Tangier Island is located off the coast of Virginia, and its primary claim to fame is not balmy beauty but the fact that the island has lost almost 70% of its land mass since the year 1850. Today, Tangier Island is a fast-disappearing symbol of climate change and sea level rise.

According to the most recent census, 727 people make their homes on Tangier Island, which has an area of about one square mile. The island is sandy and sits at a very low-elevation; most of the land is just 3-4′ above sea level. The problem for the inhabitants of this island is that sea level is increasing every year, and at the same time, the land itself is sinking due to the residual effects of an ancient glacier. According to most estimates made by environmental scientists, the entire island will be swallowed by the sea over the next 50 years… if the island keeps losing land at the current rate.

Tangier Island is part of a vulnerable group of islands scattered across the Chesapeake Bay. In the past, these islands numbered well over 500, and were important summer residences for Native American people. The islands even today are rich with oyster beds and crab fisheries, and these resources sustained Native American populations for hundreds of years before the Europeans arrived. Huge piles of ancient oyster shells have been found on the islands, including Tangier, as well as thousands of arrow and spear heads. The weapons are evidence that the islands were once much larger than they are today, and that they supported healthy populations of larger game animals.

Once the Europeans arrived at the Chesapeake Bay, things changed quickly. Native American populations were decimated by disease, encroachment, and the technological advantages of the invaders. A population of British seafarers and fishermen drove off the Native Americans, and settled on Tangier Island. Many habitants living there today are descendants of these hardy seamen, and still bear the old surnames and- because of the extreme isolation of the island- even now present the accented English of their forebears.

However, no amount of pluck and perseverance will be able to save the current residents of Tangier Island. Already today, the island is being swallowed by the sea, and the future looks grim even by the most optimistic of estimates. The land that is still above water is becoming marshy and squishy underfoot, and the sea swallows many meters of coastline every year. People who own homes and businesses on Tangier find themselves looking at a future of homelessness and displacement, with no hope of being able to sell off their assets.

While there is is currently a prospective rescue plan for the island, the plan is projected to cost in the range of $30m- a figure that is completely untenable to save an island important only to the 700 people who live there. And Tangier Island is only one of many endangered inhabited islands on the Chesapeake Bay- why save this particular island and not the others? At the same time, the coastal cities that line the Eastern Seaboard are competing for limited funds to install flood barriers, berms, and other flood control devices in order to stave off inundation. Flooding will be an ever-increasing part of life for all who live near the sea. For those who live surrounded by the sea, flooding will soon claim their entire world.