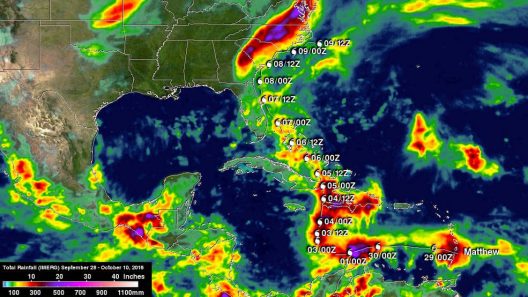 Hurricane Matthew is now long gone, having swept through the Caribbean and the southeast U.S. coastal zone in early October. But the damage and financial impact of this storm is far from resolved, and early estimates indicate that the storm may be one of the most expensive disasters on record, with estimates of damages in the neighborhood of $10.6 billion. This puts Hurricane Matthew among the top ten most expensive storms in modern history.

This image shows the amount of rainfall dropped by Hurricane Matthew over the life and track of the storm. IMERG real time data covering the period from Sept. 28 through Oct. 10, 2016 show rainfall from Hurricane Matthew before and after its interaction with a frontal boundary. Matthew caused extreme rainfall in North Carolina resulting in over 20 inches (508 mm) of rain. Credits: NASA/JAXA, Hal Pierce

Hurricane Matthew slammed the US coastline after inflicting utter devastation in the Caribbean, especially in Haiti, which was already reeling from a series of natural disasters and epidemics that have weakened the vulnerable island nation. Financial experts estimate that had Matthew struck the US coast with the same intensity that it hit Haiti, the economic damages might have reached $2 trillion. At full strength, Hurricane Matthew was a terrifying Cat-5 storm, and it left a massive trail of death and destruction in its wake. Although the power of the storm had lessened before it made landfall in the US, it nevertheless inflicted loss of life, tremendous suffering, and severe financial loss across a wide swath of the southeastern coast.

Surprisingly, this severe financial loss is something that is increasingly being debated by economists. At first glance, it may seem extremely obvious that hurricanes and similar natural disasters inflict long-lasting damage to the economy. However, a growing opinion among financial experts maintains that just the opposite may be true: that these storms in many cases end up being a wash, or may even have a positive impact on the economy when all factors are weighed in the final analysis. These experts maintain that severe storms may actually inject new vitality into the economy by creating jobs, replacing the outdated infrastructure that was destroyed by the storm, and by stimulating new investment and business opportunities during the reconstruction phase of the disaster.

A new study, however, has debunked this theory. Two economists, Solomon Hsiang of Berkley and Amir Jina of Columbia, recently released the findings of their exhaustive study of the long-term financial impact of over 6,700 cyclones. They found that these disasters inflicted financial damages that lasted decades after the storms had passed, and that there was no silver lining when the final tallies were made. While it is certainly true that some well-placed industries or companies may benefit financially from storms, the overall effect for the economy at large remains negative.

The same study also projected that given the increasing frequency of severe storms, the world’s economy will most likely suffer extreme losses in the coming decades- losses so severe that the financial impact could dwarf the losses produced by banking crises, currency crises, or even civil wars. The Hsiang/Jina team concluded that efforts to control global warming must become a top priority — not only for environmental and health reasons, but because of the enormous impact to the economy of more frequent and more severe storms.