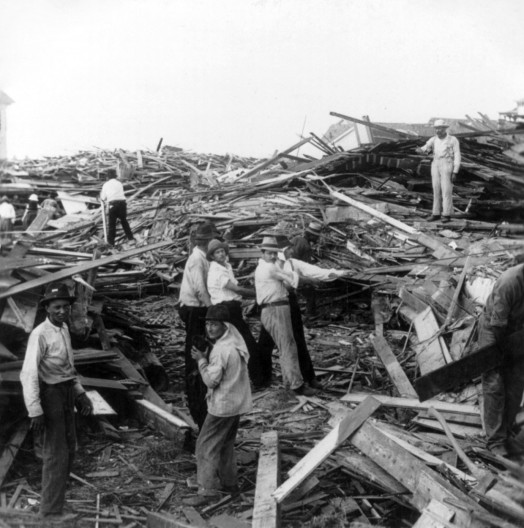 Even prior to the disastrous hurricane of 1900, there were some who voiced concerns about the vulnerability of the city of Galveston. Galveston in 1900 was one of the largest and most important cities in Texas, with major shipping and economic importance- but it was also the most precarious. The city is built on what is essentially a large sandbar in the Gulf of Mexico, and in the year 1900 the most elevated spot on the island was less than ten feet above sea level. In hindsight, it seems obvious that Galveston was horrifyingly exposed to the elements, especially in the face of a hurricane.

In 1898, when Galveston city officials evaluated their vulnerability to storms, one possibility under discussion was the construction of a large sea wall to act as a flood barrier in the event of a large storm. Isaac Cline, the Galveston Weather Bureau Director, penned an article in the Galveston Daily News in which he stated his opinion that a seawall was absolutely not needed to protect Galveston. Cline went so far as to dismiss as “a crazy idea” that a deadly hurricane was likely to ever imperil Galveston. For many, Cline’s opinion was accepted as gospel — and believed that no major hurricane would ever strike. Galveston.

Two years later, the Great Storm of 1900 ripped through Galveston, killing up to 12,000 people and obliterating most of the structures on the island. In the days that followed the storm, however, the people of Galveston showed true courage, pluck, and heroism. There were many tales of bravery and sacrifice as literally every soul on the island contributed to the rescue of survivors and recovery of bodies. Galveston immediately began the rebuilding process, and within one week, crucial telegraph and water services were operating again.

When officials convened after the disaster to determine the steps needed to rebuild Galveston, this time there was no question about the need for a seawall: the city would never again be able to rest easy without a massive flood barrier. In addition to the seawall, the elevation of the island would also be raised, by a large margin. The project of raising the elevation of an entire city is daunting even with today’s technology, so it is impossible to overstate the difficulty of achieving such a task in 1901.

One year after the storm, a team of engineers was hired to get the job done, and as quickly as possible. It was decided that the elevation of the city would need to be raised at least 17 feet on the side facing the gulf, tapering off somewhat on the inland side. Millions of truckloads of material were needed to accomplish this, and the engineers came up with an ingenious solution: they would dredge the shipping channels, and pump the slurry onto the island. When the water drained away, the sediment would remain, and this would be held in place by walls and other barriers. This solution achieved two important goals: raising the city and clearing the channels. But in order to do this, all the remaining structures, as well as gas, water, and sewer mains, had to be raised first. It was a mammoth project, even by the standards of present-day capability!

The other flood prevention project, of course, was the seawall that Isaac Cline had deemed unnecessary. No one who had lived through that dreadful night of September 8,1900 would ever again feel safe in Galveston without a massive flood barrier. The project required 60 years to fully complete, but at last the city of Galveston was protected by a huge seawall that today stretches 10 miles in length between the Gulf of Mexico and the rebuilt Galveston. The wall, which is is 15.5′ in height, was partially built by the U.S. Army Corps of Engineers, who are today responsible for inspection and maintenance of the wall.

Isaac Cline, who had helped doom Galveston when he pooh-poohed the idea of building a flood barrier, survived the Great Storm of 1900, but barely. Unfortunately, his pregnant wife was not so lucky, and she perished that terrible night. After the storm, Cline claimed that he had personally gone through the crowds at the Galveston beaches as the storm approached, urging people to seek higher ground. There is little evidence to back up this claim, and most historians believe that Cline was most likely speaking from feelings of intense regret and guilt over the fact that he had opposed the flood barrier project. A mere 15 years after the Great Storm of 1900, Cline was alive to see Galveston struck by another big storm, but this time the city was spared — thanks to the brand-new flood barrier that had been put into place, just in time.