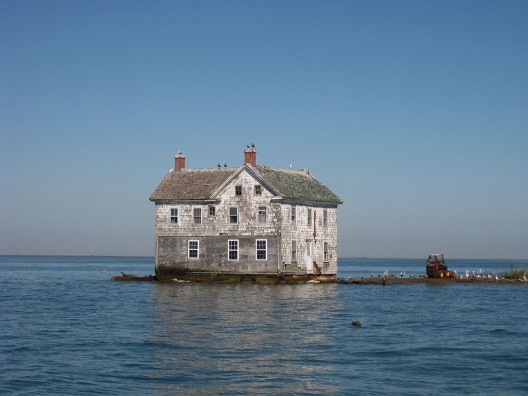 100 years ago, the Chesapeake Bay was sprinkled with inhabited islands that supported thriving communities of fishermen, crabbers, and oyster-men. In fact, these islands were peopled for hundreds of years before the arrival of Europeans — recent improvements in archeological techniques have revealed that crabbing and oyster-gathering sustained Native American communities on these same islands for many centuries.

Today, very few inhabited islands still cling to a precarious foothold in the Chesapeake Bay. Most of the islands that once hosted human communities have been abandoned because they have sunk too low to offer a sustainable foundation for the towns. One such island — perhaps the bay’s best-known illustration of sea level increase — is Holland Island.

At the turn of the last century, Holland Island was home to a relatively large community of more than 300 people. It had shops, schools, and other services that communities require. But over the ensuing decades the island began to sink relentlessly, along with all other islands in the sprawling bay.

The last house on Holland Island in the Chesapeake Bay as it stood in October 2009. This house fell into the bay in October 2010.

The Chesapeake Bay is a particularly stark example of the hazards of sea level rise, as here the ocean is encroaching at a faster rate than at other bodies of water along the US East Coast. This is because the land mass that surrounds the bay is sinking for other reasons than simply sea level rise- it is also influenced by primordial glacial activity from the last ice age. This land mass had been pushed up by glacial forces which are no longer in play, and now the land is sinking back down at just the moment when sea levels are rising.

The result of this double whammy is a spectacular, speeded-up display of what is happening in all coastal communities around the world. Islands in the Chesapeake Bay have been completely claimed by the sea in many cases, and dozens of others have been rendered uninhabitable. The people who lived on these islands for generations have been forced out by the inexorable march of the sea.

Holland Island has often been in the news because of one extremely curious situation. Until recently, the island presented a very odd spectacle: one last 2-story Victorian house rising from the sea … alone, surrounded by nothing but bay-water. The house remained standing largely due to the Herculean efforts of one man, who had made it his mission to save the house.

Stephen White, a retired minister, bought the house and most of the island in 1995, for $70,000. He would lose his investment when the island sank below the water only 15 years later. White was motivated to save the island when he happened to visit the town’s cemetery, which held the remains of a young island girl. The stone at her grave read simply: “Forget me not”. White was so moved by these words that he tried everything in his power to save the site.

White spent countless hours, expended heroic physical labor, and lost a mountain of cash trying to save this last house on Holland Island. He erected every kind of flood barrier he could think of: earth berms, sandbags, and even modern, high-tech flood panels. White incessantly implored the government for help with the flood barriers, but to no avail. He even tried to have the house moved to the mainland, but that option proved untenable.

For a time, the house remained standing, the last bastion of what was once a busy town with homes, boat docks, and even a traveling baseball team. But the sea was unstoppable, and in the year 2010 the house collapsed, and with it the quixotic quest of Stephen White.