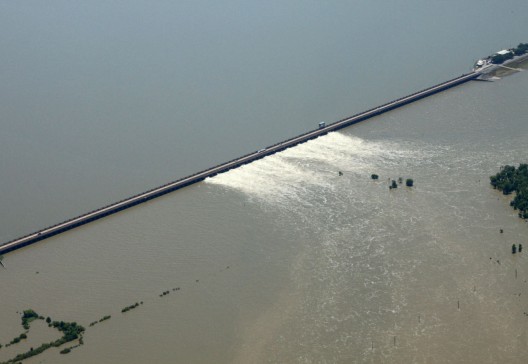 People like to build and live in a floodplain for many reasons. Some may enjoy a pleasing vista that includes a winding river or a seascape. Recreational possibilities abound near water, and waterfront homes are deemed ‘upscale’ and more desirable. In a bygone era, living near the water was necessary for trade, transportation, and even waste removal. However, one aspect of waterfront living has not changed over the years, and may never change: the threat of flooding.

In an effort to lessen the danger from floods, levees have been used in the U.S. since the mid-1800’s. According to the FEMA fact sheet on levees, these early installations were relatively primitive flood barriers that were intended to protect farmland. Whereas the ancient Mesopotamian cultures enjoyed the benefit of allowing their predictable and seasonal floods to enrich the soil, farmers in the U.S. were plagued by capricious floods that came at inconvenient moments. Many of these first levees in the U.S. are still standing, and are still diverting water and averting floods.

In the early part of the 20th century, the U.S. suffered a series of horrific floods that caused many deaths and economic devastation on a massive scale. As a result, Congress passed the Flood Control Act of 1917, which authorized the construction of levees along the Mississippi, Ohio, and Sacramento rivers. Local communities were required to foot the bill for half of the construction costs, and to pay for upkeep after construction. As a result of this legislation, massive building projects were undertaken, relying heavily on the expertise and skills of the U.S. Army Corps of Engineers.

The US Army Corps of Engineers operated the Morganza Floodway for only the second time ever (and the first time for its intended purpose) in 2011 to divert excess Mississippi River water to the Atchafalaya River Basin and relieve pressure on the mainline Mississippi River levees.

Today, many levees run parallel to the rivers they control, and provide an outlet for floodwater to be channeled off and diverted. This has greatly reduced damage and loss of life from floods, but some critics say that the levees have only encouraged more and more people to build their homes inside floodplains. This is dangerous for many reasons, not the least of which is the fact that levees can and do fail. The most recent and spectacular example of levee failure occurred in 2005, when New Orleans was inundated during Hurricane Katrina.

Some environmentalists have also raised concerns over the use of levees. A growing number of critics maintain that levees, while necessary to protect urban areas, should be scaled back or abandoned altogether in rural zones. These farmlands should be allowed to flood, and the farmers should be compensated for their financial losses. This plan is also being widely discussed and considered in the British Isles, which has seen many devastating floods in the last decade. The main objection to the widespread use of levees is that they tend to foster a sense of invulnerability in the community, and that there is a tendency to build and rebuild in these dangerous floodplains because of the perceived protection of the levees. In addition to this fallacious thinking, the levees are an attempt to artificially control wild rivers that may be less dangerous, in the long run, if left to their ancient routes and habits.