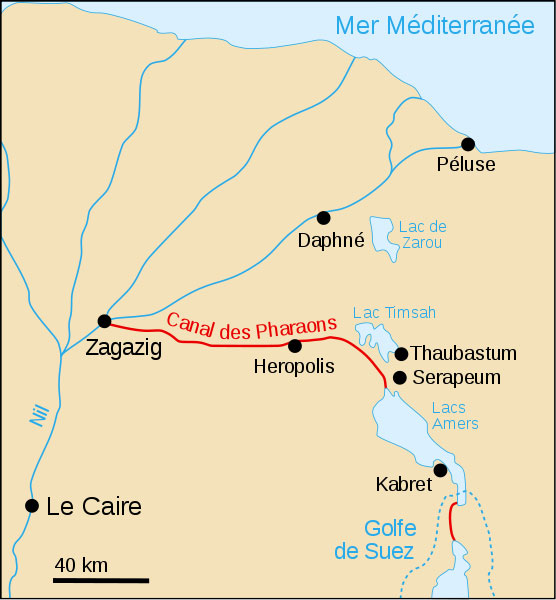 Throughout human history, flooding has been both a gift and a curse. The ancient civilizations that grew up in Egypt and Mesopotamia would not have developed the way they did without flooding. Both of these areas suffered — and benefited — from regular flooding.

Egypt was lucky enough to have flooding that was gradual, regular, and predictable. The Nile River, after swelling with rain runoff from central Africa, would flood the surrounding countryside and then recede, leaving black loamy soil that was bursting with fertility. Because of the rich fertility of the flood lands, it was possible to build up a surplus of food, enabling the people to turn their attention to other endeavors, such as art, music, and religion. The Nile was therefore seen as a beneficent force in the lives of ancient Egyptians.

First Suez Canal dug by the pharaoh Sesostris I in 1960 BC. Inspired by a map from the book “Suez & Panama” by Benedict Heimermann, Arthaud edition. Author: Annie Brocolie

Sumerians, on the other hand, came to view their rivers as a dreadful scourge. Nestled between the Tigris and Euphrates rivers, the land formerly called Mesopotamia (modern-day Iraq) was a huge floodplain that endured frequent and often devastating floods, dominating all aspects of life. It is here that two of the most famous flood myths —the stories of Noah and Gilgamesh — originated. Although science tells us that these floods were not global, they must have seemed that way to those suffering through them.

Both the Egyptians and the Sumerians learned to use their rivers for irrigation and for soil replenishment. The Egyptians, blessed with predictable and relatively benign flood patterns, learned to coexist with the flooding — moving to higher ground in advance of the flood season. The Sumerians were forced to develop strategies for taming and controlling their unpredictable rivers; and it was here that the first artificial flood barriers evolved.

A river that floods regularly will produce natural levees in the form of elevated banks. Heavy soil and material builds up along the edges of the river, leaving the lighter silts to spread across the floodplain during an inundation. The Sumerians, living on their vast floodplain, observed that the embankments provided some protection, and began to build their homes on these natural levees. Later, they built artificial mounds out on the floodplain to elevate and protect their homes. But even this was not enough to tame the destruction of the unpredictable flooding, so gradually the Sumerian people honed their skills, becoming one of the first known groups to build dams, canals, and flood barriers.

The Sumerian flood control projects were massive, even by today’s standards. Huge flood barriers and embankments were built all along the banks of the two mighty rivers — essentially, thousands of miles of flood barriers were put into place. Canals and floodgates governed the flow of water for irrigation in times of dry weather, and helped to channel floodwaters during rainy times. These were the first known man made flood barriers in all the world.

Today we have many types of flood barriers — both natural and artificial. From natural berms and dunes to fully automatic flood panels, options now exist for almost any type of situation and environment. But all these flood-control methods owe at least some debt to the ancient Sumerian culture — the first people known to attempt to tame the floods.