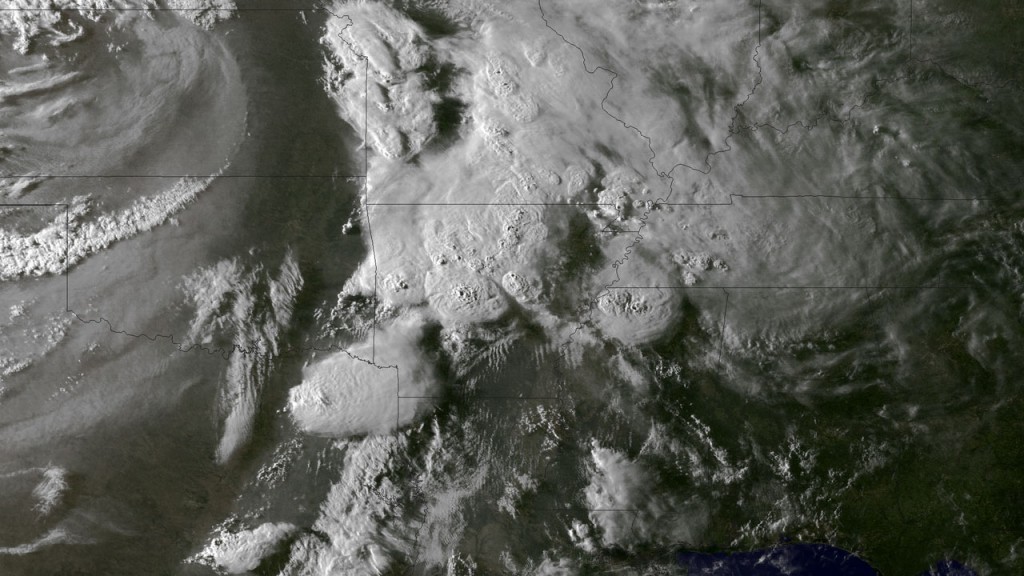 At the end of April 2014, a series of massive storm systems moved through the southeastern US, causing widespread flooding, particularly in the state of Florida. A full 26 of Florida’s 67 counties had been declared disaster zones by the beginning of May, as nonstop rainfall, high winds and several tornados inflicted major damage on a huge swath of the US.

Many states suffered serious destruction from the storms, which produced tornados in Mississippi, Alabama, Iowa, Nebraska, Missouri, Kansas, Oklahoma, Arkansas, and Florida. In all, there were 176 tornados reported- with 106 confirmed- in just the month of April 2014.

In chronological order, Nebraska, Iowa, Oklahoma, Kansas, Mississippi, Arkansas and Louisiana reported tornado sightings to the NOAA National Weather Service Storm Prediction Center on April 27, 2014. In Arkansas, the towns of Vilonia and Mayflower and the surrounding areas are reporting widespread devastation. This image was taken at 2345Z on April 27, 2014, around an hour before the tornado reports from Mayflower and Vilonia.
The NWS Storm Prediction Center is forecasting a widespread severe weather outbreak Monday afternoon, April 28, 2014, into Monday night across portions of the southern and eastern U.S. The greatest potential – where SPC has outlined a Moderate Risk – is across the lower Mississippi and Tennessee Valleys. Widespread severe storms – including strong tornadoes, damaging winds and very large hail are expected. Image: NOAA Environmental Visualization Laboratory

The multi-day tornado outbreak quickly morphed into widespread flooding throughout the affected areas, as the same systems that produced the tornados parked themselves and dumped huge amounts of rain on the already devastated communities. At least 40 people were killed by the storms.

Florida fared the worst as far as flooding, suffering inundations that have been called the worst in decades. Considering that Florida is routinely afflicted by very severe floods, this means that the situation there in April was very bad indeed. Residents and officials had been expecting the rains to move through the state, but instead the storms stayed put and dumped almost two feet of water in less than 24 hours, up to six inches in one hour alone.

Many homes and businesses found that the flood water did not enter their buildings in the normal manner. The supersaturated ground, unable to absorb any more water, percolated the water up through the foundations. Some buildings suffered over four feet of standing water, most of which came bubbling up from the ground. According to one meteorologist, the flooding in the Panhandle was the worst in over 30 years.

The last week of April brought the most severe weather conditions of the month, with over half of the continental US affected by extreme weather. This, combined with a particularly severe winter, has produced an economic down-tick that will have far-reaching repercussions nationwide. So far in the year 2014, there have been three weather disasters costing over $1 billion each. In fact, the total bill for these three events alone is estimated at close to $8 billion.

While there is no conclusive evidence that these particular weather disasters have been directly caused by climate change brought about by human activity, there is no doubt that human activity is affecting weather patterns- for the worse. Tom Karl, the director of the National Climatic Data Center, summed up the situation as follows:

“What we can say with confidence is that heavy and extreme precipitation events often associated with thunderstorms and convection are increasing and have been linked to human-induced changes in atmospheric composition.”

Four months into the year 2014, we are forced to conclude that severe weather and the flooding that accompanies it will be an unwelcome, frequent, and hazardous part of the future.