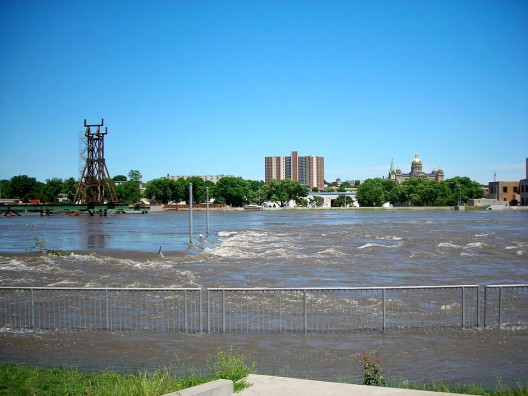 This last year there has been frequent flooding in the major river basins across the US Midwest. The Mississippi River hovered at or above flood stage for weeks, leaving residents in a state of constant vigilance and anxiety. Above-average precipitation caused more than inconvenience for many people — it caused life-threatening floods and property damage.

The area of St. Paul-Minneapolis was particularly hard hit. In this region, rainfall smashed the previous precipitation record set in the year 1965 — by almost four full inches. Many residents were weary of constant flood alerts and viewed new rainstorms with exasperation and disbelief. After a grueling winter of “polar vortex” conditions, they were not happy to have a blighted summer as well.

Meanwhile, authorities along major rivers were installing flood barriers and watching spillways with growing alarm. Floodwaters can be contained as long as they do not breach the spillways, but levels were very high — close to overflow. Any new rainstorms may well put water levels at uncontainable heights, and flooding will follow.

Des Moines River on June 13, 2008. The river rose at an alarming rate that prompted Des Moines officials to call for a voluntary evacuation. The river topped at 31.57 feet, falling short of the record high of 31.71 feet set on July 11, 1993. Photo by Ted Taber.

Many areas were already underwater from incessant summer storms. Low-lying neighborhoods along the Mississippi, Missouri, and Iowa Rivers were inundated. Streets became streams, and homes were submerged. Many buildings on the edge of the flooding installed sandbags and other types of flood barriers, hoping that the skies would remain sunny and blue long enough for the water levels to recede. Some areas were evacuated, and others were on high alert.

People living and working in these areas were highly anxious about the situation because they can remember all too well the disastrous flooding of just six years earlier. The floods of 2008 struck the same river basins that are being threatened now, and caused many billions of dollars in damages, as well as devastating loss of life and livelihood. Although many new flood defenses are now in place, these measures have not yet been tested “under fire”.

The major rivers of the United States have always been both a boon and a threat to the many cities and communities that hug their banks. Flooding along these great waterways is nothing new, but after the incredible damage wreaked by the floods of 2008, protections have been beefed up, and improvements to the system of locks and flood barriers have been implemented.

During the month of July 2014, many flood barriers and spillways were already at their maximum capacity, and any new rainfall could have sorely taxed the capacity of these defenses. At this point, a summer version of last winter’s “polar vortex” was approaching, and weather analysts predicted that more precipitation was just around the corner.

This scenario has become increasingly common. It is a race with dire consequences: will water levels recede in time to safely admit more water? Will the polar vortex arrive with major rainstorms and flooding? Will the new flood barriers hold back a disaster? Nervous residents await the answers as they contemplate whether more preparations will be required.